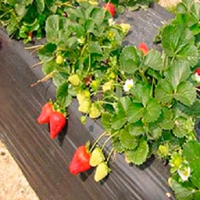 Short-day variety starting production slightly later than Camarosa. The average yield of Camino Real exceeds those of Camarosa and Gaviota, with a remarkably lower rate of second quality fruit. Camino Real plants are small, compact and easy to handle. Its fruit is large (similar to Camarosa), firm and with a darker inner and outer colour as compared to Camarosa.

Camino Real is very resistant to rainfall damage and adverse weather, as well as to relevant soil-borne diseases like Phytophthora, Verticillium and anthracnose. It is also tolerant to spider mite, Xanthomonas and common leaf spot.

Trials carried out at Irvine (California) and Palos de la Frontera (Huelva, Spain) in 2001 showed that Camino Real produces more first-quality fruit than Camarosa and is only excelled by Ventana to this respect. Trials carried out in Santa Maria (California) in 1998 showed that Camino Real has a percentage of second-quality fruit equivalent to less than half that of Camarosa.