Deprecated: Methods with the same name as their class will not be constructors in a future version of PHP; templateTools has a deprecated constructor in /usr/home/eurosemillas.com/web/templates/eurosemillas/includes/includes.php on line 2 Mojave - Eurosemillas - Lo que pide la tierra 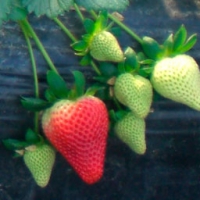 Medium-to-high vigour, especially at the start of the season. Throughout the entire season it is less vigorous than Camarosa, though.

Mojave requires the same or even less room than Camarosa.

Fruit flavour is quite better than Camarosa, particularly at the beginning of harvest.

Mojave shelf life is pretty good and in excels Camarosa in flavour. It also stands out in fruit skin brightness throughout the season.

Resistant to diseases, among them anthracnose.

Tolerant to Oidium and spider mite.