Deprecated: Methods with the same name as their class will not be constructors in a future version of PHP; templateTools has a deprecated constructor in /usr/home/eurosemillas.com/web/templates/eurosemillas/includes/includes.php on line 2 Ventana - Eurosemillas - Lo que pide la tierra 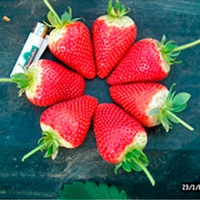 Short-day variety mainly used as fresh plant at high-altitude nurseries for winter and spring crops. Ventana starts to produce at the same time as Camarosa. However, it yields more fruit at the beginning of the season, has a greater overall production and offers better fruit quality. In comparison with Camarosa, Ventana produces less fruit in May and June, i.e. less fruit for the processing industry. Ventana plants are as vigorous as Camarosa plants, but show a more upright growth habit, which facilitates harvesting tasks. Its fruit is large (slightly larger than Camarosa), firm, resistant and a lighter inner and outer colour than Camarosa's.

Ventana is tolerant to Phytophthora, Verticillium and Oidium. It is similar to Camarosa in tolerance to Sphaerotheca and common leaf spot. Being more sensitive to rainfall damage than Camarosa, its generally produces more than Camarosa during rainy periods due to its better pollination and higher yields.

The trials carried out at Irvine (California) in 2001 showed that Ventana has remarkably higher yields than Camarosa and Camino Real, being the most productive variety available in the market today as well as the earliest. Trials carried out at Palos de la Frontera (Huelva, Spain) in 2001 confirmed those results, further showing that Ventana adapts greatly to the weather and growing practices of Huelva.