Deprecated: Methods with the same name as their class will not be constructors in a future version of PHP; templateTools has a deprecated constructor in /usr/home/eurosemillas.com/web/templates/eurosemillas/includes/includes.php on line 2 Patrón Vid RS3 - Eurosemillas - Lo que pide la tierra 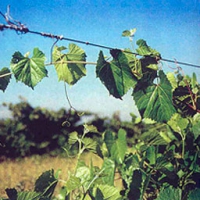 RS-3 and RS-9 rootstocks originating from interspecific crossings between Ramsey (vitis champinii) and Schwarzmann (vitis riparia x vitis rupestris). The Ramsey parent provides vigour as well as high resistance to endoparasitic nematodes. The Schwarzmann parent has less vigour, is highly resistant to ectoparasitic nematodes and provides a mechanism for resistance to Meloidogyne javanica.

RS-3 is the first medium-vigour rootstock resistant to all nematodes species, Meloidogyne spp., including aggressive populations of M. incognita, M. arenaria and M. chitwoodi. It is also more resistant to the Pratylenchus vulnus nematode, which produces root injuries; to the pin nematode (Paratylenchus hamatus); and to the dagger nematode (Xiphinema index). It is slightly sensitive to the citrus nematode Tylenchulus semipenetrans; more than half of the population is resistant to Mesocriconema xenoplax. To date, no significant nematode population has been detected on any RS-3 rootstock. This allows us to state that RS-3 is highly resistant to nematodes.

RS-3 and RS-9 provide 3 different types of mechanisms acting together to provide resistance to nematodes. For instance, when nematodes approach the root tip, a hypersensitivity response is triggered. A few young individuals may survive this mechanism by avoiding this area and developing into females which produce eggs very easily. However, such females are only partially efficient in infecting large plant cell areas suitable for feeding. Females from parent nematodes die within 30-60 days, and their feeding area is unsuitable beyond the third generation. The infected area is very reduced and only affects very young roots.

RS-3 is relatively tolerant to the grapevine fan leaf virus. In a 3-year study, it showed more tolerance than the Boerner rootstock. Evidence has been found that the roots, leaves and stems of RS-3 and RS-9 are resistant to the invasive vine mealybug (an insect of the Pseudococcidae family especially present in mild and humid climates).

RS-3 mechanisms of resistance against ring nematodes seem to be consistent under drought conditions, which make it suitable for warm climates.

Freedom remains the rootstock of choice for humid areas unless there is a rootknot nematode population in the vineyard. When such populations are present, RS-3 is the only option available today (although a reduction of spacing between scions could also be an option). In clayey soils, RS-3 is better suited for too vigorous individuals from Freedom or Harmony rootstocks. Spraying is required before transplanting vines carrying RS rootstocks. RS-3 is sensitive to excessive humidity, and it is therefore recommended not to irrigate in excess.