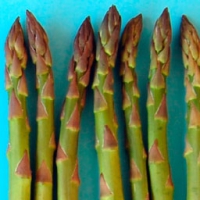 DePaoli is an asparagus hybrid very well suited for early production of fresh asparagus in warm climates. The spear heads of this variety remain tightly closed until the spear is tall, resulting in a high level of spear quality for this variety. It is capable of producing high yields of high quality asparagus for many years. DePaoli is a very early, high-yielding, dioecious, diploid asparagus variety that is well-suited for producing high quality fresh market green asparagus in growing areas with long, very warm growing seasons and not excessively cold winters.

Asparagus cultivars that have been most commonly used for fresh market green asparagus in the major growing regions of California include Atlas, Grande, Ida Lea, and UC157. DePaoli differs from these cultivars because, in some locations, it produces a higher proportion of marketable spears with tightly appressed bracts and a significantly higher total marketable yield in the long run.

The period of stopped vegetative growth is shorter for DePaoli than for most varieties, but its fertilizer and irrigation requirements are higher. It is resistant to Phytophthora megasperma, with a tolerance to Fusarium similar to UC157. In four-year old plants, the first twig grows at 75 cm in average.